So, I have been rather nostalgic lately, and spending a lot of time scrolling through my Steam library thinking “It never used to be this hard to pick a game!”.
I used to open the cabinet, choose from one of my 10 Atari games (90% likely that River Raid was coming out) and then spend the next happy hours of my life shooting planes and collecting fuel.

What does any normal person do when feeling nostalgic? Look at a photo album? Google some info?

… you’d be wrong.
They immediately hit up their local ‘Buy Swap and Sell’ facebook group asking who is selling an Atari 2600.  Am I right!?

A very tidy haul if I do say so myself!!

Now, out of the above, only 1 of the Atari (Atari? Atari’s? How does one exactly plural this console’s name?) actually worked, the second one he threw in because ‘it’s a fancy paperweight’.
And I’m sure you noticed, as I, that nice little box that reads ‘River Raid’ on the cover!!

Out of all the games I got with this… 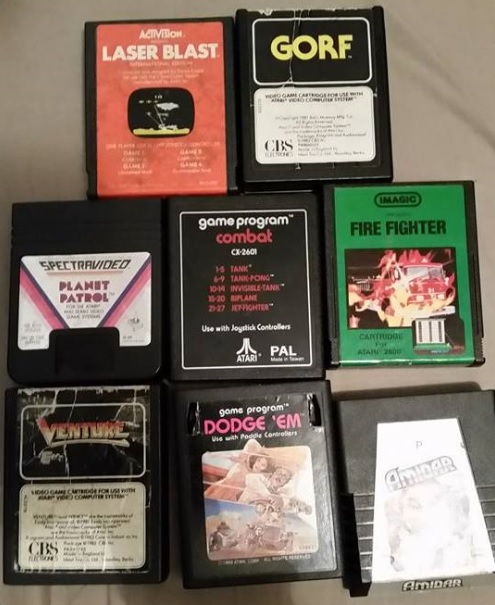 …only 1 of them doesn’t work.
Guess which one?
GO ON. TAKE A STAB?
I BET YOU’LL NEVER GUESS THAT IT WAS  BLOODY WELL RIVER RAID.

After a few moments of weeping in my soul, I moved onto inspecting my new collection of 20th century adventures.

This bad boy, looks like he has legitimately NEVER BEEN USED.

But then again, who in their right mind plays Golf games anyways?

Now, Atari number 1 was all plugged in and happily beeping away as I died repeatedly in GORF, but Atari number 2 was sitting there looking at me like as if it had been neglected and wanted some attention.

So I popped open the case to see if there was anything obviously wrong with it.

The answer would partially be – because it is HELLA filthy. Ew.
Like, I don’t judge smokers guys, I don’t.
But if you DO smoke around electrical equipment, it’s going to end up with a nice gooey grime layer like this.

Please don’t smoke around pets, children and retro gaming systems. This public service announcement was approved for use by the Ellie Foundation of Gaming.

Anyways, after about an hours worth of cleaning, I noticed that the contact points on the capacitor were not correctly touching, so I wriggled it around until it had a good connection.

I love that this is called a ‘Wang Scap’….because I’m a child.
My Atari’s ‘wang’ was broken guys. It was broken. But I fixed it.

Bring on the 8-bit adventure!

2 thoughts on “Old-School: My Atari had a broken Wang”